Crown Highways is proudly celebrating after being named Lichfield & Tamworth Large Business of the Year 2020 at the Sutton Coldfield, Lichfield and Tamworth (SLT) Chambers’ awards.

The winners of the fourth annual awards were revealed at a glittering event at The Belfry Hotel & Resort.

Crown Highways was founded in 1994 and has grown over 25 years to employ over 130 employees and support many major highways infrastructure projects across the UK. 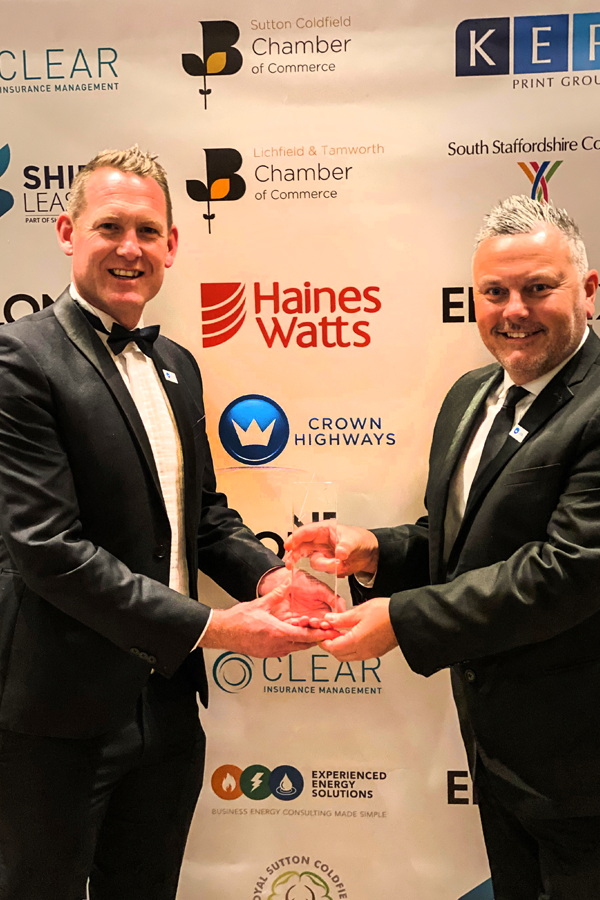 In January 2019, Crown was awarded its first-ever contracts as a direct Tier 1 contractor by Highways England.

Crown Highways have been Lichfield & Tamworth Greater Birmingham Chamber of Commerce members since 2018 and have supported the organisation through sponsorship of its annual awards (Lichfield & Tamworth Small Business of the Year 2019 & 2020) and Managing Director Mike Dale was a judge for the 2019 Solihull Chamber Awards.

The key to victory…

The successful award for Crown Highways stemmed from both excellence in business practice and achievement, as well as continued contribution to the local community and economy.

As members of the 5% club, Crown have seven apprentices within the company all from the local area, and they are running four separate apprenticeship programmes (Electrical engineering, Quantity Surveying, General Administration and Vehicle mechanics).

As the company grows further Crown endeavours to increase this number to ensure more young workers come into the highways industry.

The local Chasetown/Burntwood area is home to the organisation and Crown Highways take pride in supporting a number of great initiatives in the area:

In addition to Crown’s community work, the company’s everyday standards of excellence are paramount to their award victory.

In 2019 Crown has achieved the following:

The awards night was a celebration for the local community

“This award means a lot to us as we put a great emphasis on representing the midlands and our local community with pride. Boosting the local economy and providing opportunities to local people is at the core of what we do.

“When we can combine these values and ideals with delivery and substance it leads to awards like this as we continue to grow, develop and achieve as a business.”

Crown Highways invest in Lighting department with arrival of brand-new grab wagon and half a million-pound investment
April 20, 2021
SERVICES